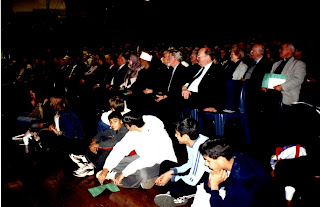 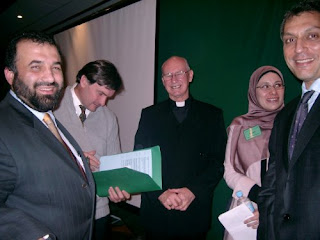 Racial and cultural intolerance burst onto Sydney's beaches and streets last December. But that is not the whole story, writes David Mills.

IN JUNE 2004 a pig's head was found impaled on a stake outside a Muslim prayer centre which was being built in the Hills district of northwest Sydney, Australia. The walls of the centre had been daubed with the pig's blood. The whole community was shocked. There had been local protest against the centre's construction, from Christian groups too. But few imagined it would come to this, particularly in Australia, a country that prides itself on giving everyone a 'fair go'. The Bali bombings, which claimed many Australian lives, and other international terrorist attacks have produced feelings of fear, antipathy and mistrust towards Muslims in Australia, who are often portrayed as having an intolerant and aggressive religion. Muslims defend themselves against this criticism by demonstrating their credentials as a peace-loving community. But they also feel challenged by having to exist in an increasingly secular society.

So, of course, do many Christians-but in spite of this common ground, they see Islam as a threat.
l to r: Keysar Trad, Richard Glover (TV presenter and facilitator) Bishop Kevin Manning and Suzan Maguid (photo: David Mills)
One of those who is searching for whether Islam and Christianity can find a basis for working together is Keysar Trad, a controversial figure in Sydney. Trad is a Muslim from the Lebanese community, one of the largest ethnic groups in a city where Arabic is the second language after English. 'Spirituality is dramatically undervalued in Western society,' he says. 'It is assaulted by consumerism. The complexities of human error have outgrown our human ability to unravel it. We need to revive our consciences and rediscover our spirituality through our different faiths'. In 2003 he and I linked up with Bishop Kevin Manning, head of theCatholic Diocese of Parramatta in western Sydney, to initiate a series of Community Dialogues between Muslims and Christians. The idea was not popular with some, including Copts who had suffered persecution from the Muslim majority in Egypt, and some Lebanese Christians who remembered their 15-year war. Everyone, including these objectors, was encouraged to take part. The first Community Dialogu took place in a large school hall in western Sydney and was facilitated by Geraldine Doogue, a well-known TV and radio presenter. Five hundred people, drawn equally from each community, gathered for a discussion on 'Muslims and Christians-sharing common values'. They were greeted with music and a sumptuous spread of mainly Lebanese food. Desire to trustTwo speakers from each tradition set the scene for the comments and questions which were to follow. Sentiments from the crowd reflected hurts, suspicion and animosity on the one hand, and a desire to trust, appreciate and be healed of negativity on the other. A Christian of Egyptian Coptic background apologised openly for the negative attitudes he had nurtured towards Muslims. 'This evening has changed me,' he said.

Participants in the Hills dialogue (photo: David Mills)
News of the event spread and soon others were asking for similar dialogues in their areas. A process developed. Small local teams came together in each area, meeting regularly for several months to plan the event and look towards followup programmes. Individuals from churches, Muslim organisations, local government and other community groups formed committees. Teams of Muslim women cooked the food. String quartets and choirs from the area provided music. Local media gave front-page coverage and interviews. A printer generously gave thousands of top-quality leaflets. Prominent media or public personalities were invited to be the facilitators. And the idea spread beyond Sydney, to Brisbane,Queensland, where the latest dialogue took place in November 2005. 'I am a normal Australian citizen like everybody else,' Suzan Meguid, a pharmacist and mother of three, told the 800 people who attended the dialogue in Hills in July 2004. 'I regularly go to the gym, I listen to 2dayFM, I love sports, reading, laughing and socialising with my friends'. 'After the events of 11 September and with the media attacking the Muslim community the way they did, I was for the first time scared to go down to the shops. I wanted to cry out to everyone in my area, "I am the same person you saw as a friend yesterday and I, like you, am appalled at this gross act of terror". After a day of sitting at home, which is quite unlike me, I finally mustered the courage and ventured out. To my astonishment people were just as friendly. I felt ashamed that I made the same mistake as the media. I committed the crime that I beg others not to commit. I prejudged.' EpicentreJust before Christmas 2005, images of mob violence flashed across the world as gangs of white and Middle Eastern youths confronted each other on Sydney's beaches and streets. As police, community and religious leaders have acted to bring calm, there has been much debate about the root of the problem. Archbishop Philip Aspinall, Anglican Primate of Australia, pointed to the answer at the dialogue in Brisbane, Queensland. 'We are appallingly ignorant of other religions and cultures. We must make some effort to learn and understand. Where ignorance continues, it breeds fear and prejudice.' The Archbishop called on faith groups to be 'honest about the good and the bad' in their own faith as well as in other faiths. 'We must avoid equating the worst in another faith or culture with the whole of it, and the best in our own faith and culture with the whole of it,' he said. 'We should celebrate the common ground between us, as well as understanding better the differences.

There need to be face-to-face meetings of people from different faiths and cultures to become peacemakers together. That may be costly in all sorts of ways, but may not be as costly as the alternative.' Across Australia a great community tradition at Christmas is 'Carols by Candle' in the open-air. Near the scenes of the violence in December, some were cancelled. But at the epicentre of the troubles, 600 people celebrated together, with police, Keysar Trad and other Muslim representatives specially invited.
Posted by K Trad at 5:14 PM