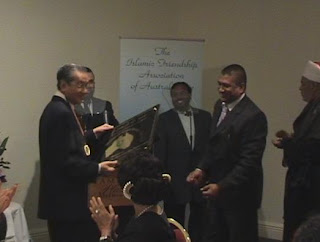 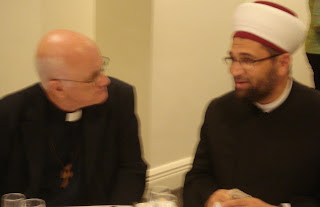 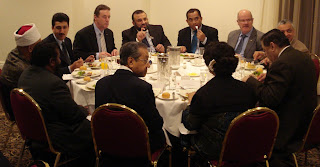 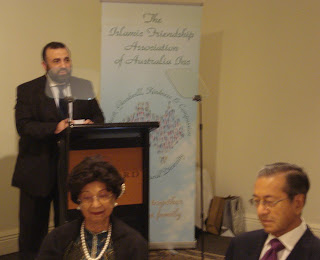 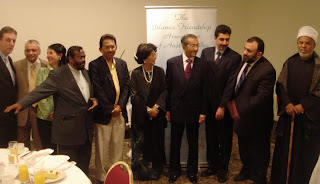 One of the group photos

In a special evening of friendship and goodwill in honour of Tun Dr. Mahathir bin Mohamad, former Prime Minister of Malaysia was awarded the Order of the Champions of Cultural Inclusion by the Islamic Friendship Association of Australia Inc. and its partner organisations the Darul Uloom Islamic Academy of Brisbane and Jamiyatul Ulama Australia.
The award was handed to Tun Dr. Mahathir by Australia’s leading Islamic Scholar and Imam, His Eminence Sh. Taj Aldin Alhilali. Imam Alhilali gave the medallion to Tun Mahathir after a moving lecture on cross-cultural respect and cultural inclusion at the prestigious Stamford Plaza Hotel in Melbourne.
The Symposium/dinner brought together friends from different faith backgrounds including Commissioner Mick Keelty the head of the Australian Federal Police, Assistant Commissioner Peter Dein of the NSW police Mr. Hussein Al Assiri representing His Excellency the Ambassador of the Kingdom of Saudi Arabia and Mr. Hamed Al-Hajri the Consul-General of Oman, Councillor Khodr Saleh deputy mayor of the city of Canterbury, Mr. Ramzi Alsayed, the President of the Islamic Council of Victoria, Rev. Dr. Tony Floyd, the National director of the Multicultural Ministry of the Uniting Church of Australia, Prof. Ismail Al Bayrak, the Fethi Gulen Chair of Muslim Christian Relations at the Australian Catholic University, Prof. Akhtar Kalam, the Chairman of the Muslim community Cooperative, Br. Yasser Soliman director of Diversity Connect and former chair of the ICV.
In introducing Tun Dr. Mahathir, Imam Abdul Quddoos Al Azhary stressed that Tun Dr. Mahthir dedication to the human family in general and his people in particular has made him the father of every Malay, the Muslim, the Christian, the Jew, the Hindu, the Buddhist and the atheist, the Imam praised Tun’s gentleness and strength, his selflessness and humility and his love for humanity.
During the evening, Imam Abdul Quddoos, the director of the event’s co-host, the Darul Uloom Islamic Academy of Brisbane also presented appreciation plaques to Tun Dr. Mahathir for his services to humanity. Tun Dr. Mahathir’s wife, Tun, Dr. Siti Hasmah was also presented with a plaque by Mrs. Nina Azam, for Tun Dr. Siti’s long history of services to humanity.
In his keynote speech, Tun Dr. Mahathir gave a history of important developments in his home country, Malaysia since independence from British occupation including the agreement that migrants could establish schools that educated children in foreign languages. Tun explained how this very legacy of British occupation has hampered cultural inclusion and social cohesion as it served to exclude different sections of society from social and cultural exchanges.
“In Malaysia, one of the major obstacles is the right to establish ethnic based schools where the teachings are in the language of the particular races. This prevents the children of different cultural groups from coming in contact with one another during the formative years of their lives. I believe that it is only in Malaysia that we find Government-financed ethnic schools where the medium of instruction is in the language of the Chinese and Indian.”
Tun expressed concern about disparity in wealth as another significant obstacle to cultural harmony and cross-cultural respect and that balance and a fair distribution of wealth are crucial for harmonious cohesive societies.

“Wealth distribution between the different races, or cultural groups is very important because even unequal wealth within the same groups can cause serious conflicts.

“Socialism and communism were born out of the conflicts between the rich and the poor in single ethnic countries and we know how it led to the violent Russian revolution in which millions were killed.

“But when the imbalance in wealth is associated with racial differences, the situation becomes even more explosive.

“Consequently, if intercultural relations are to improve, the first thing that has to be done is to reduce wealth disparities between the races. There should be no identification of race with economic function if we want to bring the races closer together.”

Tun Dr. Mahathir also identified the sharing of political power as a very important catalyst for cultural inclusion, Tun praised the moves in the United States of America for the current changes which led to the nomination of a member of a minority group for the presidency.

“Even before wealth distribution is fair between cultural groups attention has to be given to the sharing of political power.

“However we are seeing today the possibility of a great change taking place in the United States. For the first time, a candidate from a minority group is vying for the presidency of the country peopled by a very large majority of ethnically different group. But actually the process took a long time, more than a century. During that time, minority group had to fight battles, including violent battles, to be recognised as having the same rights as the majority. It looks as if finally the struggle is going to bear fruit. But actually the task is made less difficult because the candidate is not typical of the minority concerned.

“This excepted, sharing political roles fairly between the racial or cultural groups is still imperative.

“With the economic and political power fairly or evenly distributed, then the real task of building intercultural friendship may begin.

“The peoples of differing cultures must learn about the background, the beliefs and the cultures of each other. Perhaps race studies should be included in the curriculum of schools and universities. This may be able to prevent the stereotyping and demonising of each other.”

Tun Dr. Mahathir also lamented the condition of Muslims who blindly advocate one interpretation and marginalise others with a different interpretation and sometimes even causing violence against others. “For this reason we must not allow the teachings of a particular imam to divide us. This has become more important now because we are seeing more Muslims being killed by Muslims because of the differences in their belief as compared to Muslims being killed by non-Muslims.

He stressed that: “Instead, we should revert to the Quran and find out how we should live in friendship with the followers of other religions. We should remember Surah Al Kafirun – to you your religion, and to me, mine. There is not a word in the Quran which enjoins us to kill non-Muslims, except when they attack Muslims.”

“If we abide by this injunction then we will see social cohesion, intercultural friendship and understanding wherever we may be. And others too will befriend and understand us”
Mr. Al Assiri asked about enforcing one language in all schools in Malaysia, Tun Dr. Mahathir referred the problem to the agreement made at independence from British rule which allowed both Chinese and Migrants to set up schools with government aid wchih only t each in their foreign language.
Sydney Lawyer Richard Mitry asked Tun about the views in Asia about Australia’s attitude to Racial harmony. Tun praised Australia’s departure from the White Australia Policy but added that it was whilst we are making progress in Australia, we still need more before Australia will accept a PM who is Chinese or Indian.
Keysar Trad, the chairman of the Islamic Friendship Association of Australia in thanking Tun Dr. Mahathir observed “This important advice reflects the pain at the current state of the human family from a leader who dedicated his life to serve humanity, they represent the lament of a man who can see possibilities for improved relations and the obstacles to these possibilities.”
Mr. Trad also praised comments by NSW Premier the Hon. Nathan Rees who during a recent Iftar in state Parliament House expressed his appreciation for the month of Ramadan and how this holy month made it possible for people of all faiths to come together for an evening meal.